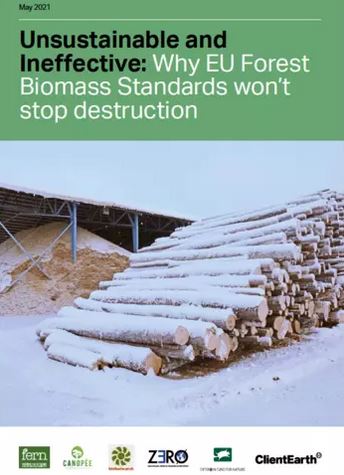 There has been intense criticism of the European Union (EU) Renewable Energy Directive (RED) for leading to adverse impacts on forests in Europe and beyond. To tackle these concerns, the EU developed sustainability criteria that forest biomass must meet to be counted towards EU renewable energy targets (and therefore be eligible for subsidies).

These criteria were included in the second iteration of the RED (REDII), for which the European Commission (EC) is developing a set of Operational Guidelines by means of an implementing regulation.

Today we publish a legal analysis of the existing sustainability criteria. It reveals that they:

Even in a best case scenario, legality does not mean sustainability, but when enforcement is delegated to private certification auditors who are paid by the bioenergy producers, the odds of even achieving legality are dangerously slim.

The treatment of biomass in EU policy is predicated on the overly simplistic and flawed idea that biomass can be a source of renewable energy that can reduce greenhouse gas emissions without harming forests. For this to start being true, there must be an immediate and substantial revision of current rules.

Moment for Nature to Provide Assessment Amid High-level Meetings -IISD

The President of the UN General Assembly (UNGA) outlined priorities for the remainder of the 76th session (January-September 2022). Among the high-level meetings convening in the coming months, he noted the ‘Moment for Nature’ that will take place in July.

The UN’s High-level Group for Partnership, Coordination and Capacity-Building for Statistics for the 2030 Agenda for Sustainable Development (HLG-PCCB) met to review implementation of the Cape Town Global Action Plan for sustainable development data, in light of needs for capacity development and financial resources for national statistical offices (NSOs).

Ditching fossil fuel subsidies can trigger unrest. Keeping them will kill the climate-EDITION

London (CNN Business)When protests swept Kazakhstan earlier this month, they were fueled by frustration with the ruling elite and entrenched inequality. But the unrest was sparked by a specific catalyst: an end to a government subsidy.The cost of liquefied petroleum gas — which most people in the western part of the country use to power their cars — doubled overnight after the government lifted price caps. The ensuing turmoil, which saw thousands of protesters take to the streets, resulted in a Russian-led military intervention, the resignation of the government and the deaths of more than 200 people.

Countries are increasingly using their NAP processes to realize gender-responsive climate action and act on the Gender Action Plan (GAP) under the United Nations Framework Convention on Climate Change.

It can be difficult to make the case for climate adaptation planning in contexts defined by fragility and violence. However, a failure to integrate climate adaptation considerations into peacebuilding plans and post-conflict development agendas can undermine the long-term viability of both. This article was originally published on the Ecosystem for Peace – A compendium of ideas website, hosted on medium.com, and is reprinted below with permission.

The Timber Trade Federation is changing its name to Timber Development UK.

We relay below the press release from Bureau Veritas announcing this first training session. We inform you of the imminent holding from March 28 to April 1, 2022 of the first training session for auditors on the PAFC Congo Basin certification scheme in the sub-region. The organization of this training is the result of the collaboration between Bureau Veritas and the organizations that are PEFC International, PAFC Congo Basin, ATIBT and PPECF.

The Fair&Precious brand, which supports the FSC and PAFC-PEFC certification schemes, intends to better interact with civil society actors, who will convey the 10 Fair&Precious commitments in the Congo basin and in Europe. These two spokespersons are joining the Fair&Precious program at the beginning of 2022: we welcome Edwige EYANG EFFA and Norbert GAMI, whom we introduce below.

This prize is a tribute to the entire IPBES community. It recognizes and rewards the efforts of the thousands of scientists and holders of indigenous and local knowledge from all regions of the world who have volunteered their time and expertise to IPBES over the past 10 years.

The recent Dakar meeting of the Eighth Ministerial Conference of the Forum on China-Africa Cooperation (FOCAC) 2021 marked a significant step in collaborative efforts to combat illegal wildlife trade and develop nature-based solutions to support an African green economy and tackle climate change.

A TRAFFIC report highlights threatened species are still commercially traded in open bushmeat markets despite legal protection in Cameroon and the Republic of the Congo. The report suggests that less protected animal substitutes may be at risk of overexploitation in the future as a result.

If waste is dumped far enough from land it cannot cause harm, it was believed for hundreds of years. This led to people using the ocean as a dumping ground for millions of tonnes of waste each year until the 1970s.

The UN General Assembly has designated 2022 the International Year of Sustainable Mountain Development. All governments, international organizations, and stakeholders are invited to use the Year to increase awareness of the importance of conserving and sustainably using mountain ecosystems.

The UN Environment Programme (UNEP) announced the 2021 winners of the Champions of the Earth award, which recognizes environmental leaders from government, civil society, and the private sector.

In this edition of the TFU we report on the outcomes of the most recent session of the International Tropical Timber Council, which concluded in early December 2021. Most crucially at the session, Ms Sheam Satkuru, a Malaysian national and the first woman to win the position, was appointed by consensus as ITTO’s next Executive Director. Ms Satkuru is a lawyer by training and has considerable experience in international negotiations and the tropical timber trade.

Antalya, Turkey – The workshop “Development of Project Proposal to Combat Desertification in the Economic Cooperation Organization (ECO) region” took place on 14-16 December 2021, organized by the Republic of Turkey, the General Directorate of Combating Desertification and Erosion, and the Economic Cooperation Organization (ECO). The workshop brought together countries ECO region including Afghanistan, Azerbaijan, Iran, Kazakhstan, Kyrgyz Republic, Pakistan, Tajikistan, Turkey, Turkmenistan and Uzbekistan, as well as the representatives of the UNCCD and FAO.

The UN Environment Programme (UNEP) announced the 2021 winners of the Champions of the Earth award, which recognizes environmental leaders from government, civil society, and the private sector. The selected Champions’ projects are expected to reinforce the UN Decade on Ecosystem Restoration (2021-2030). UNEP notes that neither the SDGs nor the Paris Agreement on climate change can be achieved without reviving ecosystems.

Rwanda is set to host the regional headquarters of Wildlife Conservation Society (WCS) following a presidential order signed by President Paul Kagame and issued in the national gazette. Founded in 1895, Wildlife Conservation Society is an NGO with headquarters in New York with the aim to conserve the world's largest wildlife and wild places in 14 priority regions home to more than 50 percent of the world's biodiversity.

Decades of declining herbivore populations in central African national parks have conservation scientists arguing that smaller reserves might be better for wildlife. As conservationists press for a major expansion of protected habitat around the world, scientists with years of experience in central Africa say new evidence calls for just the opposite in the region.

PEFC announces the departure of its CEO

At the beginning of this year, we learn that Ben Gunneberg is leaving his position as CEO after 22 years at PEFC. ATIBT wishes him the best for the future.

Read more … PEFC announces the departure of its CEO

This mission will focus on the status of women's rights in the forestry sector legislation applicable in Gabon and support to Gabonese and Congolese civil society through capacity strenghting and gender inclusion.

ATIBT in the European press in 2021-ATIBT

ATIBT has conducted numerous press actions throughout 2021 mainly around Fair&Precious brand. A look back at these advocacy activities for a sustainable trade of tropical timber.

Read more … ATIBT in the European press in 2021-ATIBT

The year 2021 ended with excellent news for the Congo Basin PAFC project: the scheme is now recognized by the PEFC Council!

For decades, Fern and partners have campaigned to strengthen the rights of forest peoples and protect and restore forests. There have been locust years, when things went backwards, and harvest years, when plans come to fruition. Gratifyingly, 2021 was a year in which the forest movement achieved outstanding successes and we enter 2022 energised and ready to defend and build on them.

UN Biodiversity Convention to host series of webinars prior to the resumed sessions of its two subsidiary bodies and working group on post-2020 global biodiversity framework.

When in 2010 the world's governments pledged to increase protected area coverage to 17% of the world's land surface, several Central African countries had already set aside 25% of their northern savannas for conservation. To evaluate the effectiveness of this commitment, we analyzed the results of 68 multispecies surveys conducted in the 7 main savanna national parks in Central Africa (1960-2017).

YOKOHAMA, JAPAN, 20 December 2021: The International Tropical Timber Council appointed Ms Sheam Satkuru as the new Executive Director of the International Tropical Timber Organization (ITTO) at its virtual 57th session concluded in early December 2021 and also endorsed a strategic action plan to set the Organization’s path for the next five years.

The CBFP Facilitator of the Federal Republic of Germany, Honorable Dr. Christian Ruck, Goodwill Ambassador of the COMIFAC Declaration, wishes you a happy holiday season 2021 and all the best for 2022

in this holiday season marking the end of 2021, I wish to express my appreciation and gratitude to you. Your rich and various contributions and your proactive and dedicated involvement have enriched and enhanced the efficacy of our joint partnership. Our fruitful and close collaboration was an overwhelming success internationally and most tangibly during the CoP 26 in Glasgow, UK.

Read more … The CBFP Facilitator of the Federal Republic of Germany, Honorable Dr. Christian Ruck, Goodwill Ambassador of the COMIFAC Declaration, wishes you a happy holiday season 2021 and all the best for 2022

At this time of year, we find it instructive to look back at our most read stories for 2021. This look back reminds us how far we have come and helps to set our agenda for the following year.

The International Science Council convened a process to reorient funding for scientific research and institutional arrangements to support needed societal transformations. The resulting report sets out a roadmap for the production of actionable knowledge in five areas that pose the most risk to the Earth as a “safe operating space” within ten or 20 years.

Latest Round of National Reports Emphasize Efforts on SDGs 3, 5 and 8-IISD

The 2021 HLPF convened in a hybrid format from 6-15 July under the auspices of the UN Economic and Social Council (ECOSOC). Leading up to the session, 42 governments had conducted VNRs, and they presented on these processes during the Forum. The DESA report notes that these governments recognized the second year of the pandemic as “a crucial time to conduct a VNR, in order to align their efforts towards a resilient recovery.”

Read more … Latest Round of National Reports Emphasize Efforts on SDGs 3, 5 and 8-IISD