State of the Forest 2013 online

2013 OFAC-COMIFAC: A partnership's success story! Discover to learn more about the Forests of the Congo Basin - State of the Forest 2013 online 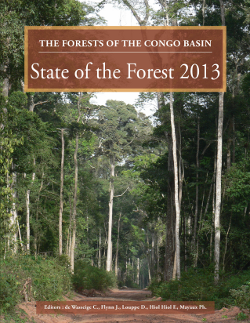 This new edition of the “State of the Forest” could not have seen the light of day without the contributions of numerous authors and readers who have devoted considerable time and energy to refining it. Financial contributions of the European Union, Norway, the United States of America, Germany, France, Canada and FAO must also be underlined.

The report represents the collaborative effort of over 150 individuals from a diversity of institutions and the forestry administrations of the Central African countries. Part of the data reported on in the SOF 2013 is collected by national groups (four to ten individuals working within the forestry administrations). The data are usually validated during national workshops attended by government officials as well as representatives of environmental NGOs, the private sector and development projects. The data provided an important basis for the authors of the 10 chapters of the 2013 Edition. The chapters were reviewed and commented by a large panel of experts (notably during the workshop that was held 21-22 March, 2013 in Douala).

The required citation is: